Home Just In Understanding the Difference Between Modern Hashing and Encryption

Understanding the Difference Between Modern Hashing and Encryption 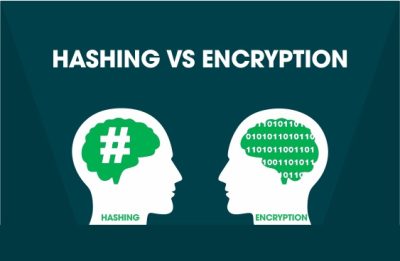 Hashing and encryption are the two most crucial factors of information and cyber security. Yet there are key differences in their conversion mechanism and area of usage.

Hashing and encryption are frequently used in the areas of information and cyber security. Even though both of these techniques convert the raw data into a different format, there are key differences in their conversion mechanism and area of usage.

Before getting to know about the difference between encryption and hashing, let’s know about them in terms of their functionalities

* To determine the integrity of a file or message during network transfer: User A, for example, can transmit a file to user B and issue a hash value along with the original message. The hash value of the received file can be calculated by User B. User B is assured that the file integrity is intact if both hash values match.

In other words, hashing is a one-way process in which data is transformed into a fixed length by an algorithm. It’s a hash value, and the resulting length is usually less than the original string, however this can vary.

MD5 Algorithm: The string is encoded into a 128-bit output using the MD5 hash algorithm. MD5 hashes are usually used in conjunction with a short string. It’s also useful for hashing data in databases. he algorithm checks whether two sets of data are identical by having a checksum of both sets and then comparing the checksums. However, due to the vulnerabilities associated with it, it is no longer in use.

SHA Algorithm: The Secure Hashing Algorithm (SHA) is a collection of six different hashing functions. They can take a variable-length string as input and convert it to a fixed-length output. The SHA 0, SHA 1, SHA 224, and SHA 256 algorithms, for example, operate on a 512-bit message divided into 32-bits blocks. The SHA 384 and SHA 512 algorithms function with 1024-bit blocks that are divided into 64-bits each.

Symmetric Encryption: The keys used for encryption and decryption are the same in symmetric encryption. That is, with the same cryptographic key, the data can be encrypted and decrypted.

Asymmetric Encryption: The encryption and decryption keys are different in this case. The public key is used for encryption, whereas the private key is used for decryption. The public key, as the name implies, is accessible to any user who visits the website, whereas the private key is only accessible to the intended recipient or party.

Encryption and hashing are used for different purposes, despite their similarities. Comparing massive volumes of data is one of the uses of hashing. Because hash values are more concise than big blocks of data, they are considerably easier to compare. Hashing is also used for data mapping since it is quick to find values with hashes, and good hashes do not overlap. Hashes are also employed in digital signatures and to generate random strings in databases to avoid data duplication. Hashing algorithms are used on passwords because they are incredibly difficult to reverse. As a result, the password is shorter and less easily discovered by hackers.

Encryption, on the other hand, is more used to encrypt data in transit. Data being transmitted is data that should only be read by the intended recipient, hence it must be sent in such a way that an attacker will not be able to read it. Encryption conceals the data from anyone intercepting it in transit, allowing only the owner of the decryption key to read it. Other situations where encryption might be preferred over hashing include data storage and data retrieval in databases, authentication methods, and other situations where data must be hidden at rest but retrievable later.

The frequency of successful data breaches has increased dramatically in organizations of all sizes. Hence, sufficient security processes must be implemented to prevent these attacks. You can protect yourself from these attacks by encrypting the messages you want to send. It encrypts the message to protect the underlying data from prying eyes. As a result, the information can only be decoded by the authorized recipient.

Hashing is a another method you can use. Any length of data can be mapped to a fixed length. It’s a one-way function, and reversing the hashed message is technically infeasible. Regardless, they are both excellent at dealing with data security. There is future enhancements that are in the works to secure systems and networks in the face of potential cyberattacks.