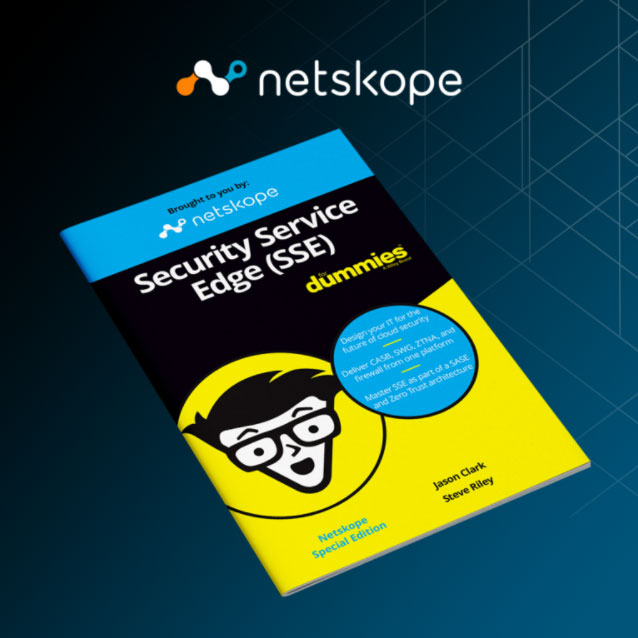 SASE is an architecture—more accurately, a long-term journey—that will revolutionise the way we think about security and networking. However, SSE, as part of SASE, is a collection of cloud-delivered security services that you can get and use right now.

Still, separating clear, advice-based information regarding SSE from the torrent of industry noise and marketing around both SSE and SASE can be challenging.

That’s why, Netskope has announced the release of its new book, Security Service Edge (SSE) for Dummies, the first SSE resource of its kind.

True to the world-famous Dummies series it now joins, this book is intended to be your practical, no-B.S. explainer for SSE, its importance relevant to concepts like SASE, Zero Trust, and secure digital transformation, and fundamentally, how to build and deliver SSE capabilities.

Successful implementation of SASE and SSE is much more than swapping out technology. Zero Trust changes some basic assumptions about how security works. In the on-premises, network-based model, the assumption is that the network is secure and we must verify a person’s identity before granting access. So, we trust the network and verify the user. The typical paradigm granted the person access to everything or nothing—“allow” or “block” were the only choices.

Based on this context, the confidence level of the person’s session is determined, and the person may be trusted either a little bit or a lot. A person requesting access at an unusual time from an unusual location to a highly-sensitive application (an instance of a low confidence level) likely will encounter a multi-step authentication process. The access granted may be limited to a small set of data and functions, and then in a read-only mode. A worker who’s accessing at their customary time from a secure location (an instance of a high confidence level) may get full access to all data and application capabilities.

Within network security, you often hear the term Zero Trust Network Access (ZTNA). ZTNA is an excellent choice for augmenting your virtual private network (VPN) to accommodate more remote access scenarios. With ZTNA, users don’t receive access to an entire portion of a network that could allow connections to many services. Instead, ZTNA grants the worker a connection only to the application they’re seeking to use and—as shown in our doctor story—only the minimum access needed to perform the task at hand.

Implementing SSE using Zero Trust principles shrinks the attack surface and is far more data-driven, thus greatly improving the overall security posture. The level of risk presented by a person, an application, or a website undergoes continuous reevaluation. Security is adapting in real time based on changes in context.