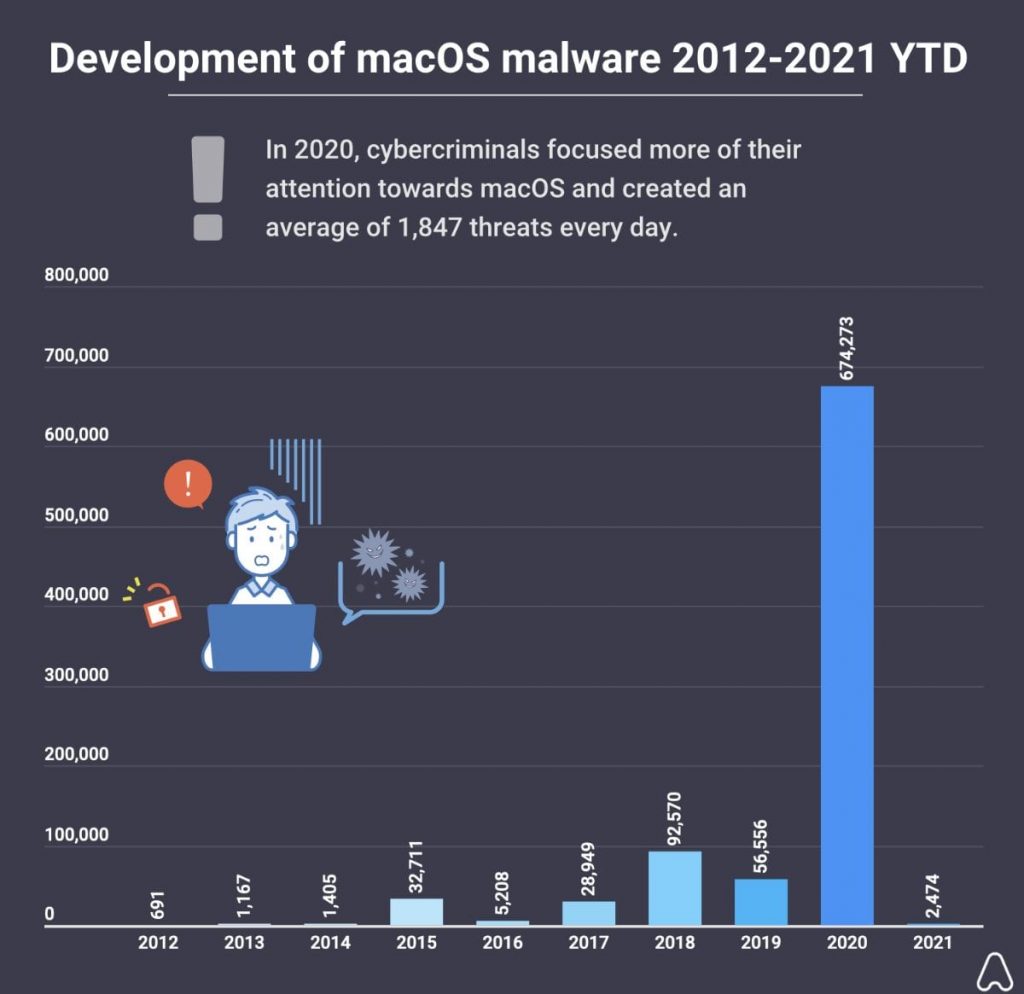 The malware development data was extracted on March 17, 2020, from AV-TEST GmbH, an independent research institute for IT security.

The development of malicious software for Apple’s desktop operating system macOS spread like wildfire in 2020, amounting to a historic high of 674,273 samples.

If we add up all the new malware since the beginning of measurement in 2012, we get 219,257 samples, which is still well below last year’s numbers. From 2012 until 2019, new malware’s development reached the maximum high of 92,570 samples per year.

In 2020, cybercriminals geared more of their attention towards Apple’s desktop OS and created an average of 1,847 threats every day.

Whenever data breaches or significant cyber incidents occur, it is almost certain that some type of malware was involved. Often, malicious software is used to steal data and user credentials. Then, hackers request a ransom from the victim company to get back the data, or criminals will release the data to the public. Businesses often agree to the demands in order to protect their reputation.

Contributing to this record surge in threats is the fact that new malicious software is now easier to engineer than ever before.

Nowadays, hackers don’t even need advanced programming skills since they can purchase a ready-made malware code, tailor it to their needs with a little bit of coding, and establish a completely new threat.

Data shows that a record-high of 91.05 million new Windows malware samples were discovered in 2020. In other words, cybercriminals developed an average of 249,452 threats per day.

The scale of new threats is on a different level compared to macOS. There were over 135 times more Windows threats than there was macOS in 2020.

For Windows, the number of new threats is climbing at a slower pace, but windows malware still rose by 1.98 million in 2020, representing a 2.22% increase from the year before. In short, it is becoming clear that the cyber threat landscape for both operating systems is worse than ever before.

As malware permeates businesses in nearly every sector, the costs related to these incidents continue to rise as well. Not only is the amount of new malware at record-highs, but our recent findings reveal that cybercrime cost the world more than $1 trillion in 2020 — around 1% of global GDP.

The COVID-19 pandemic forced people to work remotely, which, in turn, created a huge attack surface for cybercriminals