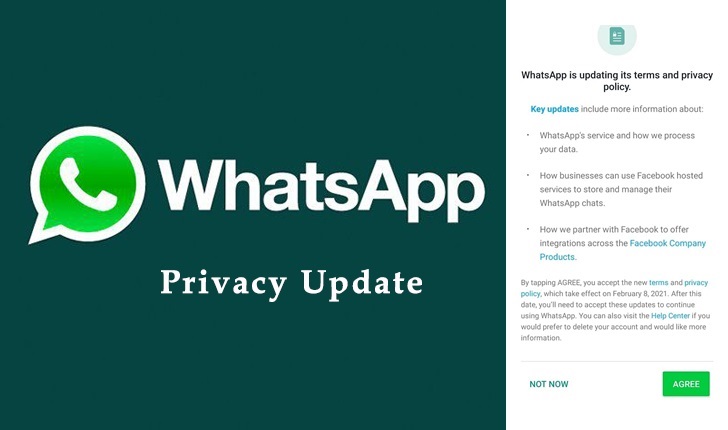 With the new WhatsApp privacy policy, there has been a uproar on this recent disclosure. Will this move start smartphone users opting for Telegram and Signal messaging apps. Read on to know more…

Last week WhatsApp alerted users to a new privacy policy effective February 8, that expressly said that WhatsApp will share user data with its parent company Facebook. Users earlier had an opt-out option, which won’t be available now. WhatsApp has already has sent ultimatum-like pop-up messages to users in some regions, including India, asking them to accept the new privacy regulations or they will risk losing their accounts.

Damage Control
WhatsApp clarified in a statement that the update does not change its data sharing practices in any way, and “does not impact how people communicate privately with friends or family wherever they are in the world… WhatsApp remains deeply committed to protecting people’s privacy.” Further in the notification, WhatsApp said it does not store messages once they’ve been delivered and specially when they are end-to-end encrypted, and the third parties can’t read them.

According to Facebook Inc., the latest policy gives reasons for the data-sharing with Facebook — from ensuring better security and fighting spam to improving user experience, which were there in the previous policy as well.

WhatsApp shares the following information with Facebook and its other companies. Some of the crucial information that are shared are account registration information (phone number), transaction data (WhatsApp now has payments in India), service-related information, information on how you interact with others (including businesses), mobile device information, and IP address. It is also collecting more information at a device hardware level now.

All About Profit
It is all about business. Facebook is going to have big profit from this as all these data from WhatsApp will go to Facebook. A number of companies like Facebook have created big data centres to keep information of millions of people and once Facebook shares this data with those companies, it will get massive benefit from them.

As per updates, Facebook’s earnings in 2019 were Rs 5 lakh 21 thousand crore and its business will now grow further after WhatsApp receives data from 200 million people in the world.

The new privacy policy explains how businesses get data when a user interacts with them on the platform — content shared with a business on WhatsApp will be visible to “several people in that business”. This is important because WhatsApp now has over 50 million business accounts. For WhatsApp, this is a potential monetisation model.

Drifting Popularity of WhatsApp
Last week, social media was abuzz with several users declaring that they were going to move to Telegram or Signal, and such discussions also dominated WhatsApp groups. As several users are part of the WhatsApp platform, they are apprehensive about how their conversations will be mined by Facebook and are thinking of moving to Telegram.

Data from app analytics firm Sensor Tower showed that there has been a increase of 79% in downloads of Signal app from India during the period January 1 to January 6 compared to December 26 to December 31.

Sensor Tower reported that Telegram, though more popular in India, only saw a marginal increase during the six-day period compared to the week before that. Telegram’s download ranking on Google Play, however, steadily rose over the past few days.

The downloads of Signal were likely fuelled by Elon Musk and whistleblower Edward Snowden’s endorsement on Twitter. Users flocked to the app so much so that Signal’s server could not handle the requests for phone number verifications of new accounts.

Last week, Signal app tweeted that “Verification codes are currently delayed across several providers because so many new people are trying to join Signal right now (we can barely register our excitement). We are working with carriers to resolve this as quickly as possible. Hang in there,”

A Brief Conclusion
The choice of an alternate apps like Telegram and Signal depends on where most of one’s social circle already is and how conscious about privacy users are. Given mass use in India, analysts also said that WhatsApp is here to stay, and it would take a lot for people to shift their social circles to a new app.